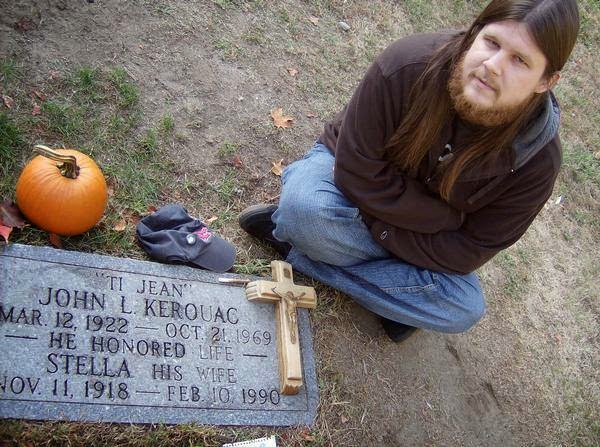 By Kerouac’s Grave
by Pat King

Sure, but I do realize that I’m quite the vain man, the pain-in-the-ass man. Dear friends, this is why I love looking at old pictures of myself, love showing them to other people. “Look, look, here I am! I’m real! Let me tell you a little about myself…” Most of the pictures are casual snapshots, taken either by my dad or mom. They’re nice enough things to look at and, in my dad’s case, done with a certain sense of aesthetics, since he was always an amateur photography enthusiast. However, among all the snapshots and pictures taken on vacations and holidays, there’s one picture that I particularly cherish. It just sums up a moment so completely. Yes, I’m pretty sure it’s my favorite picture.

Observe the photo’s composition: it’s framed deliberately, thoughtfully. It’s meant to evoke something very specific, perhaps something that the photographer only knew unconsciously, after all, she had only a moment to snap the thing. It’s clear that the photographer is trying to get at the real meat of the subject. The subject was my sad, dead-drunk face, my broken heart.
The photographer was Katie Jachowski. Later she would become Katie King, my beautiful wife. Maybe that’s part of the reason I’m so attached to the photo, because Katie took it. But Katie’s taken a lot of pictures in which I’ve been the subject. No, this picture is special. This one says so much.

Observe my late-20’s hipster long hair and the hoodie I was wearing and the all-too-serious look about my face. I wasn’t happy.

The picture was taken on an unusually warm mid-October day in 2007, the final morning of an annual Jack Kerouac festival in Lowell, Massachusetts. The weekend had been a blur. We didn’t go to many events. Only one, actually. It was a Jazz brunch kind of thing that I have vague memories of. We wandered the city and drank whiskey in our hotel room. The whole thing had a tie-wearing, appeal-to-authority kind of vibe. We had more fun just doing our own thing. We did, however, make sure to visit the original On the Road manuscript. The teletype scroll was on display at a textile museum.

That whole trip had a kind of lost weekend feel.

I wonder whether that look in my eyes, the one that Katie captured so well in that picture, was the same one a literature professor saw when he said to me, “Just don’t end up like him,” meaning Kerouac, after I had casually mentioned my weekend plans to him: the drive from Baltimore to Lowell, the readings, how much I was looking forward to the whole thing.

Like drinking myself to death, living my last decade in isolation, shunning my friends and dying from cirrhosis of the liver? Nah, man, not me. I was 27 years old and never going to die. I liked excess, I liked extremes. So what if I had been drinking and overeating for the past decade? What the hell? This guy, this tie-wearing literary professor thought that I was romanticizing Kerouac’s life. I guess he figured I thought it  would be cool to die in physical and mental anguish, to have my body shut down. Get a life, man. Fucking asshole.

Maybe I was kind of on the way toward killing myself. It’s hard to say for sure, because by that time I didn’t really drink with any real frequency. I would binge, sure, but I would also go cold turkey for a few months at a time. But couple that with my out of control eating and it was obvious that a breakdown of some kind was coming.
It crept up slowly, but it seemed so sudden.

I was already overweight when the picture at Kerouac’s grave was taken, but I would keep gaining. Seven years later, I was 310 pounds. A hulking beast of a man who could barely walk without getting winded.
In late September 2014, I had just started a new supermarket job. I had only been there for a full day and a half day when the freakout happened. I’d been noticing that, for the past week or so, my vision had been getting bad. I used to have perfect 20/20 sight, but now I couldn’t see much past a few feet ahead of me. I thought maybe my eyes were sore or something. I didn’t know what was going on. I just figured it would get better on its own. But it didn’t get better. On that second day of work, I noticed that I couldn’t see a customer’s face across from the deli counter. I panicked and said that I needed to leave.

I went home. I told Katie what was happening and she came home early from work and took me to the emergency room. The nurse nearly gasped when she saw that my blood sugar was at 445, way over the normal 60 - 100 range. No good. Diabetes. Katie and I sat in the waiting room, silent, for about thirty minutes, until I was admitted.
Over the next four hours, I was given insulin. My sugar got down to about 140. After a long lecture on what I could eat (not much) and what I couldn’t (just about everything I liked), I was finally discharged. My vision had already started getting better before we left the hospital. It took a few days, but it finally returned to normal.
I was devastated. I took the next day off of work. I figured I was fucked. Surely I was going to get fired.
I lay in bed, self-pity washing over me. All I wanted was to sleep, to drift away…

Katie got home from work that afternoon and walked into our little apartment to find that I had locked myself in the bedroom. I didn’t really mean anything by it. I just wanted to be alone for a while. But I guess I did mean something by it. Katie, panicked and afraid, called my dad, who drove 45 minutes just to talk to me. I wouldn’t let him in either, so he talked to me through my locked door. As always, he was kind, gentle, his voice soothing. He did his best to talk me down from my freakout. Finally, after about an hour, he asked, “What’s next? What’s the next step?”

I knew I had to do it. It was a daunting step because of my embarrassment over being so new and already calling out -- a working class dilemma if there ever was one. But if I could just make it through the day, through the awkward motions of a new job and new people, then the worst of it would be over. Then I could really get going.
And so I went to work. A couple of days later, I started to walk.
It was only a few blocks at first. I got winded easily. But I kept walking. Every day at first, then five days a week, pushing myself a little more each time. Months later, I started to jog. I still have to alternate between jogging and walking, but I’m getting there. I’m making progress. I’m going to make it.

By December 2014, I’d lost over 50 pounds. I was still about 260 pounds, quite a bear of a man, but getting smaller, getting healthier. I was also eating right. Meat and vegetables, bread every once in a while. No sugar. And I started meditating again, something I hadn’t done for months. All this is to say that, while these aren’t the happiest days of my life, they might end up being the most contented.

But, man, that picture. Sitting cross-legged at Kerouac’s grave didn’t mean much to me at the time, except maybe that I got a cool picture of myself out of it, a way of saying, “I was there.” But now I look at it and can’t help but see a kid. A kid pushing thirty who thought he knew his trajectory. I was trapped by a faulty sense of imagination. I’m 34 now, and far less sure of myself than I was back then. But what did being sure of myself ever get me?

Sometimes I can’t help but shake because of the immensity of it all.

Thank you, Katie. I love you.


Pat King is the author of the classic underground novel EXIT NOTHING.

Posted by Bruce Hodder at 2:15 AM No comments:

"Merry-Go-Round" has been available for a while now. It's a perfect gem of a book by a writer who I've only known, previously, for his poetry. According to the introduction by editor Johnny Mains, however, Bryn has been writing stories like those featured alongside the poetry here for years and years. Shows what an authority I am.

I know some of the poetry. So might you, if you read the little magazines, or if you saw me read them at a festival last summer. They're presented in six sections between the stories, and they explore some of Bryn's familiar themes--music and family in particular. His science fiction poetry is new to me. A taxi driver on Mars studies to keep his brain ticking over. The Siren Women of a distant planet slaughter their males by tearing their flesh with sharp teeth.

Clearly the self-deprecating Mr. Fortey has an imagination as wild as H.G. Wells and Edgar Allan Poe. And they are the authors I kept thinking of as I read the stories. Not because Bryn is copying them, or even, necessarily, influenced by them; I'm not an expert in horror or science fiction, genres that most of the stories fall into, so if the author's style has precedents, I almost certainly don't know them. But the horror stories, especially "Shrewhampton North-East", which starts the collection, have an eerie mystery, and a perversity, that almost belongs in the Victorian periodicals. (When I say the stories are perverse, I mean that as a compliment.)

And like Wells, Bryn's science fiction takes us to places our own minds could not conceive of. He imagines technological advances that allow for the instantaneous transfer of human beings from one place to another, or from one time to another. Time travel, of course, is one of the most venerable tropes of science fiction, but Bryn handles it with real ingenuity. In "The Oscar Project" the protagonist journeys back to the days before Christ's execution--an interesting premise in itself for an author who has rejected religion, as Bryn seems to have done. I won't spoil your reading by telling you what happens, but the drama that unfolds is intensely gripping and beautifully described.

As I've already written, music is never far away when Bryn's around. It's something he and I have in common. Other stories in the collection concern his beloved jazz, a subject he writes about as well as anyone. I like most "The Pawn Shop Window", a melancholy tale about a trumpet player who lives in the Golden Age of jazz but never makes it. In some ways, at least for me, that one's about poets too: all the really wonderful men and women Bryn has known and I have known who lived hard lives trying to bring something to the world that the world didn't want. People in the small press whose stars were eclipsed by greater talents (like Louis Armstrong in the story), or lesser talents, like the poetasters whose academic connections got them mainstream publication and write-ups in the TLS.

You can probably still order copies of "Merry-Go-Round" online at www.alchemypress.co.uk. I think it's a very good book, and not just because of my long-standing friendship with the author. There's science fiction in here, for Heaven's sake. Anyone who can get me reading, and even enjoying, that has got to be worth a wider audience.
Posted by Bruce Hodder at 2:00 AM 1 comment: