I wish I had the strength
to bear the pain of life,
where my caged heart suffers,
and the only one I


ever loved is someone
else’s bride. What God has
made this my gift? Why was
I created at all?


I rise each morning and
face the divine sun’s blows.
At night, I live in dreams.


There is passion in the words
of poets who fall in love with their first poems.
In ecstasy they wave their publication credits
around. They seek praise like a dog that can
roll over, sit, or play dead. The clapping hands
are few, some attached to the hands of other poets,
who seek the same praise for their own first poems
fresh out of their minds or fashioned at workshops
where poetry is trapped and put to death.

A POEM FOR THE HOPELESS


The last time we kissed,


I had no poems in my journals,
no wild stories about beasts or madhouses,
no longing for the music of a woman’s laughter,
no chants about the divine.


The lines came after,
some given to me by you.


I needed you more.


If I had to take score,
I would always struggle
with what life had in store for me.
I did not know what to do.


Without you I feel like nothing.
Who knows how I made it this long?
And I know I exaggerate a little.
I still don’t know if my life is a waste.


Will there be more love before I’m laid to rest?
A twist of fate
might arise out of this darkness.
I would take you back in a second.
There is no denying that.


Whatever is left of this heart,
whatever life I have left,
I would trade every poem I ever wrote for you.
Posted by Bruce Hodder at 6:45 AM No comments:

Before Tomorrow
--- “There is no crime of which I cannot conceive myself guilty.”… Goethe

I’m in no hurry to leave the close-spaced security of the bus, so I lean back in my seat and wait until everyone is out. Then I walk to the front, take two steps down-back in the “real world”.

After four years, three tours in Iraq, and two days of military psych-docs attempting to drive out the bad times with clever talk and good intentions, I am discharged-officially cut loose from a surreal world of free-fire zones and indiscriminate killing.

I am uncomfortable in the uniform, a costume that has defined me for so long-now meaningless. I am a phantom in an empty coat. It’s clear, that in this place, I am lost. Scenes cataloged in heartbreaking detail have no place here. Stories that once burned blood red-gone cold as the ghosts who breathed them.

The low hum of the idling Greyhound mixes with the fumes of diesel fuel to fill the night air with noisy poison. A skinny panhandler wearing a camouflage T-shirt sits crumpled like lost luggage outside the depot. One of those forgotten people living a half-life just beyond anybody’s caring.

At his side, a wrinkled square of cardboard-a kind of faded-brown American business card. Scrawled across the front is the familiar graffiti, “Out of Work.” One look at this guy and I know he’s done for. The whole fucking story is right there in his eyes-like looking at the floor of the ocean.

Standing just out of range of a street lamp, I watch the shadows of tree branches move along the empty avenue. Almost every night, I come to stare at this vacant lot on the corner-the spot where the Lighthouse Baptist Church once stood.

One drunken Saturday night back in 1975 my father, lonely for God, broke into the little wooden sanctuary and doused the whole place with gasoline. Then he took a seat in the front pew, lit a Lucky Strike, and burnt the son-of-a-bitch down around his ears-the last “Zippo Party”.

My father spent most of his life in a rage. When the whiskey was talking, the old man would rave about “search and destroy” patrols wiping out entire Vietnamese villages. When there was no one left to waste, they’d flip open their cigarette lighters, and burn everything to the ground-“Zippo Party”.

Bent under the weight of things that can never be set right, I slide a shaky right hand inside my jacket pocket and retrieve a half-pint of I.W. Harper. I raise a toast to the Lighthouse Baptist Church.

Somewhere a lost dog howls. I step from the curb-a windblown bird into the crazy night.
_____

Room 105 is hot. Shades and curtains drawn. Fractured light from the muted television. The air conditioner hums, but puts out nothing.

I stand naked staring at my flickering reflection in the bathroom mirror. My hair is growing fast, and I haven’t shaved since the day I became a civilian. I do not recognize myself.

I turn on the cold water, bend over, and drink from my hand. I smile at the idea of trying to get clean with the tiny bar of hotel soap on the sink. I let the water run through my fingers and watch in a trance-round and round and down the hole. Feeling a little light-headed, I turn off the water, walk into the bedroom, and sit on the edge of the bed.

Each day I draw a new plan in my head. I imagine impossible strategies that I will carry out before tomorrow. I try to picture blueprints for a cause that will somehow fill this void inside that grows dark, and is beginning to eat through.

How long since I’ve been out of this room? When was the last time I ate? Two days-three days-more...

I’ve lost track of time. I no longer feel any obligation to the clock.

I wonder how “time” became so goddamn important-the whole fucking concept. Humans trying to stamp order on chaos. And then, once we’re on the clock, we spend the rest of our lives worrying about how much time we have left before we’re dust-clicking the remote control, desperately searching for a sacred channel that will save us all. How many more bullshit/sleight-of-hand distractions until… poof-and a pile of ashes?

I lie back in bed and close my eyes. I try to empty my brain. I wait for the thing that I can hear coming.
_____

In a half-sleep, I can feel the emptiness that stretches out from my body in every direction-360 degrees of nothing, as dead as a disconnected phone.

I open the back door to my mind and dream-walk through the wreckage scattered across the floor of my memory. A dark room of unrecognizable images. My mind is out of control. Dreams have become one with the dreamer.

A dull thumping in my head-the dragon is at the gate. I open my mouth to call out-to give myself up. My vocal cords are paralyzed. The thumping grows louder against the heavy silence.

I wake up in a sweat. Someone is knocking hard at the door. Still confused, I stumble naked across the room, unlock the door, and throw it open.

Standing in the night rain-five men. All dressed in the same strange uniform-long white coats and black shirts. Black berets with some sort of badge on front. Two of them are very young-steely-eyed boys armed with short-barrel, pump-action shotguns.

The man in front has a full beard, and seems to be the leader of the group. He raises his right hand, takes a short-step forward, and says with authority, “Sir, I arrest you in the name of The Virtuous Circle.”

Unshaken, I stare out into the empty, rain-slicked streets-mute. The traffic light at the intersection blinks yellow.

The honcho points toward the two men stationed to his left. They move quickly. One takes out handcuffs, and secures my hands behind my back. The other slips a black bag over my head.

Raindrops cool my body as I’m led across the hotel parking lot. I am helped into the back of what is obviously a van. The door slams shut. Rain comes down harder, clattering against the metal roof, drowning out any other sounds. For the first time in years, I can breathe out.
_____

When the hood is removed, I am standing alone on a small stage. A run-down movie house. Dark except for a single footlight directed toward my face. The two shotgun wielding kids are positioned on the floor directly below me.

I can make out an audience of silent, shadowy figures standing with arms raised above their heads in a mock-religious pose. The air is stuffy and nearly unbreatheable. I have the strange feeling that I have played this scene before.

The recognizable voice of the bearded leader comes out of the dark.

“The defendant may now voice his plea.”

If my heart was made of stone, I could resort to the fine art of denial and deflection. I could say that I was just doing my job. I could say that it was all about getting even. I could say how fucking tired I always was because I could never let up. Constantly wired together tight, because there was no way to tell the enemy from the innocent civilians, until eventually they became one and the same.

But for me there is nothing left except a desire to be finished.

I’m about to speak, when the quiet is interrupted by a sharp, metallic click. The flare from a cigarette lighter draws my attention toward the balcony. Caught in the light from the flame, the outline of a man’s face. Eyes on fire, he lights a cigarette.

He studies me intensely for a few seconds, then nods a greeting.

I glance down toward my silent accusers-back up toward the burning face in the balcony. With some effort, I manage to say the word.

Instantly and in sync, the armed guards rack their shotguns.

The room goes completely dark.
Posted by Bruce Hodder at 2:59 AM No comments: 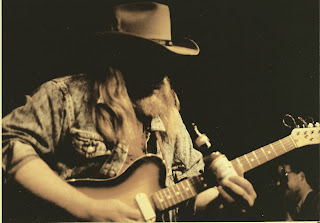 blow it all away
--- for Brautigan

tiny voice
of the counter-culture
found-dead as hell
rotting on the floor
beside a bottle
& a .44-loser
in a one-man gunfight
against a deadly hand
caught unprepared
during those minutes
of the day & night
when nasty
black fingers
started to pull
at his dirty shirt tail
abandoned
by the hip crowd
who once waltzed
like children of hamlin
to his clever songs
searching for a little
fucking grace
in the frayed face
of sister suicide-
now
the forever hungry
cannibals circle naked
around his body
tearing away chunks
of another deserted son
no longer watched over
by the fickle
machine of mercy

clean-collar commuters
peer from the cover
of stylish shades
taking secret comfort
in a pathetic apparition
wrapped
in an army overcoat
face down
in a pool of piss
baptized
purified
crucified
in the mute humility
of his own guilt
while inside crusty
rust-filled ears
distant city traffic
hums like a “huey”-
spectral medevac
searching for a soul
lost forty years ago
somewhere along
the mekong river
Posted by Bruce Hodder at 5:03 AM 50 comments: